Several applications are presented here as examples of using modern scintillation detectors (NaI(Tl) or LaBr3(Ce)) together with the high-precision spectrum analysis software SODIGAM.

The automatic surveillance of several decay tanks in a decontamination plant which operates in cyclic mode (see example below) will provide at least one datapoint per day and per container. One can control the system via the decay curve as shown in Application1 (below). Spectra are analyzed with SODIGAM yielding reliable activity results over many orders of magnitude, the lowest being below the German “Freigabe Grenzwert” (the legal limit of radioactivity for release to the sewage system ) of <5Bq/l.

Significant advantages of in-tank measurements are:

The nuclide Ba-133 is often used in nuclear medicine for the calibration of gamma cameras that are used for I-131 imaging (therefore it is also called “pseudo-iodine”). Because it has peaks in the same region of the spectrum of I-131 and a long halflife, high-activity sources of Ba-133 are an ideal tool for homogeneity calibration measurements.

The SODIGAM program can correctly analyse even strongly overlapping peaks in spectra from BrilLanCe (LaBr3) detectors. Thus, these new detectors with good resolution can now be used for quantitative gamma-ray spectrometry at room temperature. Using portable spectrometers, one is able to make in-situ measurement and high-precision on-the-spot spectrum analysis.

Prospecting measurements using a portable gamma-ray spectrometer with NaI(Tl), CeBr3 or BrilLanCe detectors provide a fast and safe method for in-situ determination of thorium and/or uranium contents in rock or other materials. The quantitative spectrum analysis with SODIGAM yields reliable data on the Th and U contents.

Measurement of NORM (scales) from the oil- and gas-industry

Relevant measurements of scales in tubings, valves and other contaminated components in the oil- and gas-industry can be made using portable gamma-ray spectrometers with NaI(Tl) or other room-temperature scintillation detectors. Material from wet or dried lagoons containing “produced water” from drilling rigs can also be surveyed. Spectra are analysed on-line with SODIGAM yielding nuclide-specific contamination information that will serve for immediate and well-founded decisions how to proceed.

Measurement of Co-60 in steel production

During steel/aluminium/copper and other metal smelting processes one must measure on-line the potential contamination of material. Typical measuring times are 5 minutes per sample and requested activity limit values are 0.1 Bq/g for Co-60. The sample mass is typically around 80 to 100 grams.

Analysis of a CZT spectrum

A spectrum of U-235 was measured with a 1 cm^3 CZT detector for approx. 2.5 minutes. The spectrum is analysed with the SODIGAM program for quantitative peak deconvolution. In the example the deconvolution of a complex multiplett around the main peak at 185.7 keV is shown.

Example: Waste Decay System
All institutions who handle radioactive material with activity above exemption limit are requested to permanently supervise the inventory and to provide consistent documentation without gap. This request is forced by federal agencies.
The above statement is generally valid, i.e. it applies for all kinds of institutions and places like:

The key to continuous supervision of any radioactive inventory lies in dedicated software with special properties..

Our software is specifically developed for that application as it

Waste Decay System
The measurement in a waste decay system is chosen as an example for automatic activity supervision. Waste decay systems are part of any nuclear medicine department or radiological clinic in which patients are diagnosed or treated with radioactive substances. Radioactivity which is administered to the patient for diagnosis or therapy (e.g. 131I or 99mTc) will be excreted or exhaled and must not enter the public sewage system but rather must decay under controlled conditions. Sanitary sewage, washing and shower water as well as sometines exhaled air are therefore collected in tanks in a waste decay system for further treatment.

In the waste decay system the water is treated biologically, chemically and mechanically similar like in a municipal wastewater treatment plant. There can be aerobic or anaerobic treatment depending on the technology of the plant. The radioactive inventory in the plant is measured at all times in order to find out when the activity is below the release level and water can be pumped out to the public sewage system. Special measuring systems employing cyclic activity determination allow gapless supervision of many tanks with only one multichannel analyzer. Cross contamination between tanks or illegal activity dumping is immediately detected.

According to German law sewage water is allowed for release when the activity of 131I is below 5 Bq/l provided that the total released volume exceeds 105 m3 per year and it is 50 Bq/l when the total release is below.

Similar measuring systems are employed in facilities that capture 131I in activated charcoal or other filters. The activity loaded material is stored and supervised accordingly.

Waste decay systems are normally provided by specialized enterprises who design, build and install the system according to local needs. Major firms in Germany who take over that job are EnviroDTS, WAT or Roediger. Modern installations are often designed as vacuum systems where significantly less water is needed for flushing and the tanks can be smaller than in other systems.

Old waste decay facilities are tun systems where several pots merely serve to hold the radioactive sewage during decay. There is no mechanical, chemical or biological treatment of the water but just sedimentation and compacting of solid material in the sewage. Tun containers are not easily cleaned.

Modern decay systems are built as cascading systems where several tanks sit in parallel and at any time only one of them is selected for capture of incoming sewage. When one tank is full the next empty tank is automatically selected for capture and the controlled decay and treatment sequence starts in the freshly filled tank. Treatment typically comproses of neutralisation, regular airing, decarbonisation, mechanical stirring and other means. There must be sufficiently many tanks to accomodate all sewage that is produced during the decay of radioactive waste in a tank.
The storage time in tun and cascading systems is determined by the longest halflife of the radioactive nuclides involved. One has to store the sewage long enough so that the activity of all nuclides is below limiting activity values for release; for 131I it is normally around 20 weeks.

The latest genertion of waste decay systems are “Bio-Chroma”-facilities. Here the water is pre-reated in an aerob environment and all solid components are removed by filtration. In a Bio-Reactor organic components are very effectively decomposed in the next step. The following sedimentation stage (sometimes supported by a filtration step) leads to sewage without any solid components. This water is lead through absorber materials (ion exchange resins and activated charcoal) where among others radioactive nuclides are retained. The outcoming water is clear and almost free of activity. After a last storage step with final water treament and neutralisation an exit measurement for residual radioactivity is made and the inactive water is released into the public sewage system. Radioactivity is almost completely retained in the absorbers and it decays there in the following. A significant advantage of Bio-Chroma facilities is the fact that storage time is not determined by the longest halflife of nuclides involved but rather by the time it takes to go once through all cleaning, reaction and absorption steps. This leads to a facility which takes significantly less space in the basement and which costs significantly less than a cascading system.

The shielded spectrometer provided by Dr. Westmeier GmbH is a gamma-ray spectrometer with scintillation detector and a very good shielding. 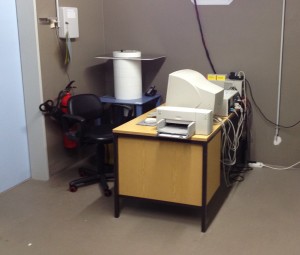 The system has integrated software for hardware set-up and control as well as spectrum analysis software. In the picture (left) an elaborate measuring system is shown, consisting of a lead shield for 1-liter Marinelli beakers or 1-liter Kautex bottles, or any kind of sample containers up to 220 mm diameter. The basic unit of the system is a desktop PC in which special hardware is housed for automatic surveillance of four measuring positions, in addition to the detector in the lead shield. Actually, this system serves for the automatic surveiilance of a 4-tanks waste decay system and it also provides the shielded spectrometer as an extra feature. The analysis software is designed according to recent developments in spectrum analysis by Dr. Westmeier GmbH.
Typical applications for the shielded spectrometer are:

An extensive article on the shielded spectrometer is found here.