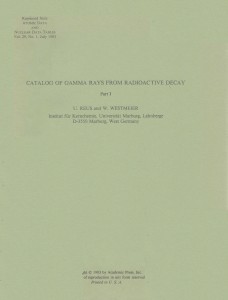 An employee of Dr. Westmeier works since decades in collecting and evaluating published data on radioactive decay on nuclides. In the evaluation there is particular emphasis to find out that experimental methods employed are really suitable for the specific purpose, that uncertainties are properly defined and provided, that energetic balances are maintained, that data fit into systematics (where applicable) and that there are no significant discrepancies between the current data and other publications on the same subject.
The first Gamma-Ray Catalog was an A4 folder full with single sheets published as GSI-Report 79-2 (U. Reus, W. Westmeier, I. Warnecke, „Gamma-Ray Catalog“, Gesellschaft für Schwerionenforschung, Februar 1979, Darmstadt). The original idea to update this evaluated compilation by exchange of sheets was abandoned because of increasing demand for the data. In the year 1983 an updated version of the Catalog was published in an international journal:

It was planned to publish another updated version of the Catalog by the German publisher Landolt-Börnstein where the literature cutoff was planned to be after January 2006. Due to the untimely death of our dear colleague and friend Dr. Ulrich Reus our project could not be completed. Ulrich left the evaluated data set having a publication cutoff date of January 2000 as his legacy.

Because of the very positive acceptance by users of the Gamma-Ray Catalog it was decided to compile and evaluate an Alpha Catalog using the same criteria on consistency and quality. The Alpha Catalog was published in the journal Physik Daten/Physics Data (W. Westmeier, A. Merklin, „Catalog of Alpha Particles from Radioactive Decay“, Physik Daten/Physics Data 29-1 (1985), ISSN 0344-8401). Data compilation, evaluation and publication of data were benevolently supported by our professor Dr. P. Patzelt from the Institut für Kernchemie der Philipps-Universität. We thank Professor Patzelt as well as the Rechenzentrum der Philipps-Universität in Marburg for their continuous support of our activities.

The IT enterprise cjt Systemsoftware AG has produced together with Dr. Westmeier a PC-based nuclide-information-tool which becomes increasingly important for every worker who has to do with nuclear radiation in all appplications.

Details for the catalogs are provided in the links below.